skip to main | skip to sidebar

My own fascination with the Saint George began at the age of six or seven, with the ubiquitous picture (common in this part of the world) of the saint, when I held up the decorated umbrella as part of St. George Day procession at Thonackadu church. The elders had told me the fairy tale (the one we are all so familiar with) when asked who was in that picture: Geevarghese they named the hero.
Until recently I didn't know that the names Varkey and George had the same root: “Gewargis” (In Syriac) and so both refer the same. The variants of this name are probably the most common names among the SyrChr.
In spite of being one of Christendom's best-recognized saints, with patronages of many European countries, the real character behind the icon is actually a mystery. It would be surprising to know that the Catholic Church had tried to relegate the status of this saint a couple of times in history, unsuccessfully. The fact is the icon could not be traced back to an actual event or a real character.

Even keeping aside the local variations of the dragon-killing lore (there is Georgian, English and others) there are conflicting traditions. Examine a few:

Historians have scoured past references and ancient texts to try identify the real person behind the icon and found something complicated. It turned out that the icon evolved over time; Understanding the mysterious origins was much like de-layering the onion but they may have come close.

The gist of the research is that the icon (the knight & saint George on a horse slaying a dragon) maybe a composite! A composite composed of multiple layers of fact-malignment done over centuries of his-story revisions and imagination.

I will go for a very quick rundown of the (his) story build (the details may bore/confuse who are not familiar with early christian history):
Whatever the reality behind the character of the icon, the popularity of the same in Kerala is as interesting. Only a handful of churches fit the list of pre-Portuguese Gregorian churches (i.e. Aruvithura, Karingachira, Kadamattom and Edapally); the foreign influence (being patron saints of both Portugal as well as England) may definitely have bolstered the already existing patronage but they may not be the original introducers.

With the legend supposedly strong in the Levant (oldest texts being in Syriac & Greek from the 5th century), the icon plausibly have been brought into the Malsabha by the migrating-parties (the Knanaya?); and right-fittingly into the dark and exotic land in India. A shining hero was what was required for the pioneers into the demon-filled, disease-aired, serpent-infested but fertile-heaven (St. George is also the patron for land tillers and agriculturists). The icon would probably have enthralled the local communities too with hope of a saviour in a land obsessed with sarpa-dosham and rahu-ketu. The icon fitted perfectly for the SyrChrs and taken root ever since.
Posted by Sujith Philipose No comments: Links to this post

﻿
Found these in wikipedia: Very good illustrations on the schismatical history and so decided to share this here. The pictures below are not mine; all credits to the original owner(s). Thank You Collaboration!


This one depicts the birth of the different (major) christian denominations (global). Notice the Oriental Orthodox split from the mainstream after the Council of Chaledon. SyrChr orthodoxies belong in this main group.

Next one is on a Middle-Eastern (Regional) view. As I said in the last post, its a bit more complicated when it come to ethno-politics of this place :) The following are some parallels with the SyrChr churches: 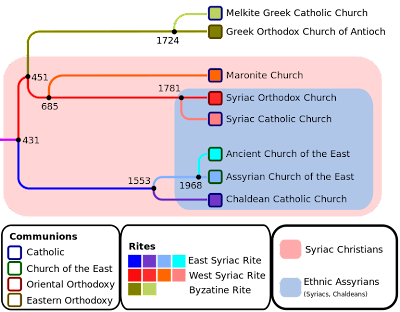 And finally below is the chaos within the locals: the schisms within the SyrChrs. Small mistake between 52AD to 1665 though : Its only from the 3rd or 4th century that the East Syrian (nestorian) influence can be confirmed. 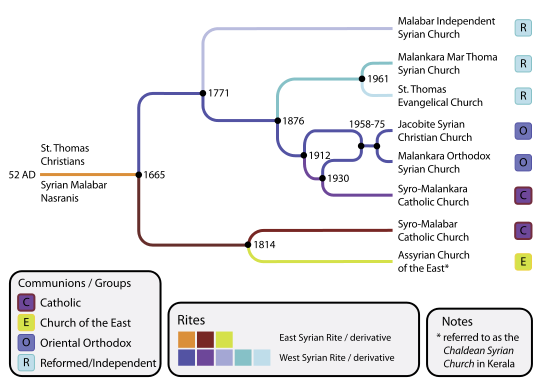 Picture says a thousand words; am sure this post saves many posts for Sharbtho.

Posted by Sujith Philipose No comments: Links to this post

Email ThisBlogThis!Share to TwitterShare to FacebookShare to Pinterest
Labels: Origin

While one reads through the available SyrChr literatures; these terms can cloud your understanding :
Syrian & Assyrian: “And the disciples were called Christians first in Antioch”. Quite nearby and not long later, Edessa had many Christians. Syriac was the then language of the region and soon it became known as language of Christian communities there. These Christians began to be called as Syrians after the Roman province in which they lived – Syria. As Christianity spread to Persia, India and all the way to China, Syriac and Syriac rites went along with it. So a Syrian (Christian) of China or India was and is not necessarily a Syrian by ethnicity.

Now regarding Assyrians: To get into Middle-Eastern nationalism is messy to say the least! Let’s just leave it as this: Assyrians are an ethnic group, remnants of the ancient Assyrian civilization in northern Mesopotamia (Iraq and neighbors).

Confused already? You should be. More ...

Syriac: Note that there are at least two Syriacs in use within the Syrian Christians! West Syriac script, like Serto, are or rather were used in places nearing the Mediterranean Sea (Turkey, Lebanon, North Iraq, Syria) and East Syrian dialect and script, like Chaldean, was used in places eastwards (South Iraq, Iran, even India).

Over time the Syrian orthodoxies concentrated over the western political divide and the (Nestorian) church of the East was contained in the east.

Saint Thomas churches: The Apostle Thomas is said to have established the seven “and a half” churches in Kerala or Ezharapallikal at
The source of the above information is the mysterious Rambanpattukal, which is claimed to have been originally composed by a first (local) disciple of the Apostle. But what we have now is a 16th century reinterpretation by one Thomas Ramban Malliekal.

Strangely many other churches also contest to be among the primary St. Thomas establishments. And except of Niranam and Arapally, the most others are disputed for its authencity:

Malabar & Malankara: Both simply refer to the region now known as Kerala in South India.
During the dividing-times in SyrChr history, Malabar was largely prefixed by the (more) Northern syro-catholic groups and so the (more) Southern Orthodox faction chose the prefix Malankara to their sabha names.
The word ‘Malankara’ origins from one of the Saint Thomas stations: Maliankara. Malabar now points to northern Kerala.

Puttankuttukar & Pazhayakuttukar: meaning New Party and Old Party referring respectively to the Orthodox and the Catholic factions of the SyrChrs.
Pre-Portuguese, the Malsabha were largely following the Chaldean Syrian rite; with the (new) affiliation of a group with the Antiochene Syrians this group switched to the (new in the context) rite and West-syriac scripts; thus the labels.
But one cannot conclude the original pre-Portuguese SyrChrs line with these terms! The Old Party is also now almost ‘Romanized’ in my opinion and the New Party strives to prove that all was not Chaldean in SyrChr history.
Catholic & Orthodox: SyrChr's Portuguese-era accounts for muliple instances of bishops being 'examined' for their catholicity and/or orthodoxy. These two terms are liberally and interchangebly used by polarized SyrChr historians to prove the affiliations of the Malsabha.
Before we get confused with their writings lets understand the meanings of the words and putting it in context.
The word 'Catholic' means universal and 'Orthodoxy' means Right Belief. The term orthodox is generally used to distinguish the faith or beliefs of the "true Church" from other doctrines (traditionally referred to as heresy) which disagree. So, after the heretical weed-outs of the early christian history, all was Catholic AND Orthodox with the five patriarchs (in Rome, Constantinople, Alexandria, Antioch, and Jerusalem) ruling their respective 'empires'. Each of these regions had common homogenized beliefs and definitions on Christianity but masses differing in language, liturgies, vestments and traditions. Until infighting, between the Western Rome and  Eastern rest-of-the-four, unbalanced the equation and ultimately led to the Great Breakup of the 11th century. The twain were called Western Catholicism and Eastern Orthodoxy since as each owned up the respective terms into their church names to emphasize their superiority.
After which there was no reconciliation till date. Over time the split widened to the point that they almost dont recognize each other or their common history. Both of them claims to be both catholic and orthodox even now but do not fuly accept the other side... much like divorced couples.

So what was the case with the examination on the bishops in SyrChr historybooks? Just that they were investigated for heresies, specifically Nestorianism : Whether the creed was the same as in the original undivided church; whether the liturgy and the sacraments are consistent with the orthodox belief and How the Virgin mary was addressed among them. And almost all of Western Catholics and Eastern orthodoxies would have passed that test.
Marthoma: And the biggest fogger of them all. In SyrChr context this term can refer to the following:
Posted by Sujith Philipose 2 comments: Links to this post