skip to main | skip to sidebar

Martha-Shmooni in whose name is there are Jacobite churches, one at Peroor, Kottayam. Dont blame you if you haven’t heard the name; there is only a couple in her name in the whole of India. Funny part is this saint is actually not even Christian (!) and is in fact the mother of zealous Maccabee martyrs.
Her glorification is centered on the fact that Martha-Shmooni, in defiance watched all her 7 sons (including her youngest a baby) and her teacher St. Eleazor be tortured and cast into a fiery pit. There is an ancient church in her name in Iraq near the Kadisha valley.
Name variants in which she is referred are [Shmuni, Shmouny, Salomone, Samone, Solomonis, Solomonia etc.]

Mor Kuriakose and Mortha Yulithi: The names would be reacted with better if pronounced as in the variants below. As others, Yulithi is one in the very big list of first-generation-Christian-martyrs. She was another mother who had to witness her child's death for her christian beliefs. A painting depicting the two can be spotted in the Puthupally Orthodox church.

Mar Abo, an obscure Persian prelate who is also supposedly the mentor of the legendary Kadamattathu Kathanar. There is a lot of confusion on whether this character is the same as the Sapor part of the duo that landed later in Kerala.

This possible Chaldean reached Kerala sometime was back in the 4th century. Was he an occultist? An exorcist? An herbalist? Nestorian? Nobody knows but he is supposedy entombed at the Thevalakara Orthodox church near Karunagapally.

Bahanan sahada can be easily confused with Saint George except that this saint is mostly depicted without a beard and there is no dragon around in the picture. This handsome saint is of Assyrian origin and was Christianized by St. Mattai (Mathai/Mathew) of the 4 th century. Mor Bahanam, his sister Sarah and 40 others were massacred for giving up their old traditions.
[Bahnam, Behnam] 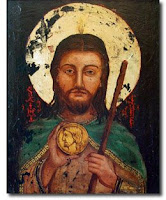 Mar Addai as per some records was a disciple of Saint (doubting) Thomas but Addai is also doubted to be Judas Thaddeus, one of the apostles. It is the liturgy of Addai and Mari that is used in the East Syrian Churches. This early Christian was among the first proselytizers; he converted the King Abgar of Edessa.
[Aggai, Jude, Addeus, Thaddeus, Thaddaeus, Tadeo]

Mor Sabor & Mor Aphroth, the legendary 'Sabor and Prot' mentioned in Kerala history through their mention in the Thareesapally copper plates. The plates state that they arrived in Kollam in 825 AD and established a number of churches in Kerala during that period (one of them the Kaadeesa church in Kayamkulam). The Kollam era 1 is incidentaly Chingam(Leo) 1st of 825 AD. Sabor & Afroth's affiliations are still not yet clear but all sects of Nasrani Keralites own them in their respective histories'. Some say that Mar Abo mentioned above is actually Mar Sabor.
Interestingly there is a clan of Orthodox christians in Chathanoor, Kollam(Quilon)that claims to be direct descendents of Mar Sapor...or it may be from one in his entourage :-) The clan surname is 'Muthalali'.
It is suspected that Mor Sabor and Mor Aphroth were Nestorian bishops sent by the Chaldean Patriarch Timotee I. If that is true the strangely the Nestorian archenemy, the Jacobites, own the famous church in their names at Angamali.

Gerwasius & Protasius, were 2nd century Milanese twins; just another in list of early Christian martyrs. In those days it was a sure shot death warrant if you were a Christian in Italy. Citizens of Rome loved the entertainment from 'infidels' being roasted, flayed, quartered or torn apart by lions. It was a house-full back then  at the local amphitheatre.

A few churches in Kerala are strangely named after these saints; the most ancient of these being the Catholic Church at Kothanalloor & Udayamperoor … highly probable that this church was renamed in order to cover up the so-thought 'darker' Nestorian affiliation with Mor Sabor & Mor Aphroth.

Mor Kaumo, a 5th century Syriac monk of Lebanon who meditated for 45 years in the standing position! 'Kaumo' is supposed to mean 'stand' in Syriac.
I feel this is none other than Saint Simeon the stylite who is mentioned in the thubdens (diptchs) of the Syriac Orthodox Qurbana (mass).
Alvarez Mar Julious: We must have heard of people being catholicized but rarely do we hear of Catholics converting 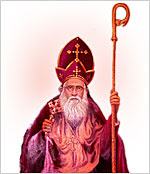 to orthodoxy. And it is even rare that one of the latter remains a vehement adherent to the last breathe. Antonio Francisco Xavier Alvares was a Goan Roman catholic priest of 19th century who not only shifted to orthodoxy himself but also managed to bring a group of Roman Catholics along with him. Would have made some headlines back then in Goa, but his ministry was  efficiently hammered down, by the Catholic church, using inquisition-styled humiliation, imprisonment and ostracism.

Goa has managed to erase most history of this 'shameful' episode but the bishop can be proud of his dent on the Roman catholic stronghold: there still exist a group of orthodox adherents at Brahmavar...they were converted from the Latin rite by this bishop. He is supposed to have collected some orthodox elements together in Sri-Lanka too. The Ribandar orthodox church in Goa is mostly used to by the malayalees there.